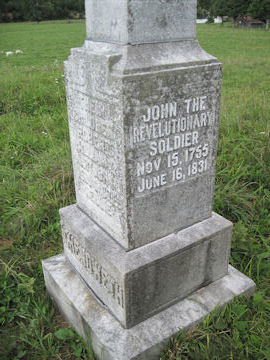 He was living in Hampshire County, Virginia when he enlisted in the spring of 1776 and served as a private under Captain Abel Westfall, Colonel Muhlenberg and Colonel Bowman in the 8th Virginia Regiment of the Continental Line.

He fought at the Battles of Brandywine and Germantown and was taken prisoner at the Battle of Germantown along with his regiment. He was held ten months as a prisoner, part of that time aboard a British prison ship in New York and then finally exchanged.

He again served in the fall of 1781 and guarded British prisoners taken at the surrender of Lieutenant General Charles Cornwallis at Yorktown, Virginia in October 1781.

Mary Pugh Chenoweth, was allowed a widow’s pension on 28 June 1837 for the Revolutionary War services of her husband, John Chenoweth.